Responding to the budget and performance demands of mid-sized bakeries, the Delta EZ combines an affordable price tag with the ability to produce hermetically sealed extended shelf life packs at speeds of up to 100ppm, thanks to an innovative longitudinal sealing system.

The Delta EZ model sits between the entry level Delta 3000 and the 200ppm high-spec Delta X in the range, giving bakery manufacturers a new mid-range option within the industry-leading MAP flow wrapping platform. At the heart of the Delta EZ is a longitudinal sealing system that was developed by ILAPAK for the Delta 6000 to give maximum flexibility in terms of substrates. This means that the Delta EZ is as adept at handling the co-extruded films favoured by food service operators as it is at running the PET-based barrier films typically used in retail MAP applications. The system uses four pairs of rollers: two sets of heated rollers for sealing and two sets of variable speed cold rollers for drawing the film through the system. As well as the longitudinal sealing module, the Delta EZ comes with several features from the Delta 6000 as standard. These include a multi-belt infeed to enable automatic phasing of individual tortillas or flatbreads into the folding box, automatic splicing that facilitates rapid reel change and an adjustable folding box that accommodates products ranging in diameter from 6” up to 14”. The Delta EZ is designed to run off conventional pillow packs with a longitudinal fin at speeds of up to 100ppm with in-built MAP gas flushing capabilities as standard. Thanks to the Delta’s modular design philosophy, the machine can easily be configured to incorporate additional modules such as a reclosable feature or double reel mounting. 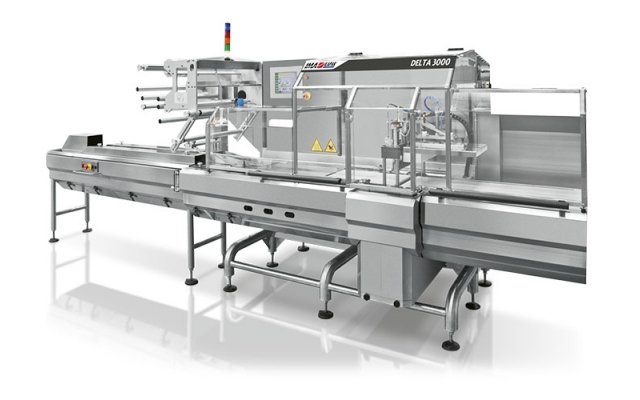 The following information will provide you with an easy to navigate overview of what will happen with your personal data when you visit this website.

Data will not be used for profiling or processed for marketing purposes. All additional features designed to improve the customer experience and provided in order to improve navigation customization will be disabled. This choice could compromise the proper use of the website.

Without these cookies, functions that allow convenient browsing on our website, for example by remembering settings, will not be available.

These cookies and tracking mechanisms allow us to provide you with a better user experience and individualized offers.

Fill this form to be always updated about Ilapak’s world